I’m back with new adventure 😎

A few weeks ago was so fun! I went to Jakarta with my friend and we visited some historical sites. Most of it was museum.

My friend has booked our flight tickets for Lion Air long before the Lion Air flight JT 610 crashed. We were a bit terrifed when we heard the news. Fortunely, other than the delay, our flight was safe and sound. We arrived in Soekarno-Hatta Airport at approximately 08.30 p.m.

We were stuck on delay for around two hours. What’s more miserable was after the so long wait for flight and busway from the airport, our hostel was such a crap. I didn’t blame it tho, it’s a low budget hostel for backpackers in West Jakarta. But, too dirty.

We almost wake up all night just because there were so many insects, especially cockcroaches. My friend didn’t even want to take shower. We’ve booked the room for two nights, but then we decided to go out the next day.

After washing face and brushing teeth at 09.00 a.m, we went to traditional market near our hostel in Glodok area for breakfast. We ate dumplings in a Chinese restaurant, it’s so delicious! If you love pork dumpling, I recommended this place, “Kuo Tie Akin”.

If you are a coffee addict you should give it a try. I highly recommended this place for they said this place sell a cup of coffee you won’t find anywhere else. I did try the well-known “Es Kopi Susu” there, and it was indeed delicious. They also sell food like noodles.

Then, we walked to a Chatolic Church, Santa Maria de Fatima, still in the traditional market area. It’s a church with Chinese decoration.

After that, we used Gojek to go to Maritime Museum that located in the old Sunda Kelapa harbor area, North Jakarta. Maritime Museum displays different fishing boats from all around Indonesia with its own history.

They have a tower too, a lighthouse. Sadly it still under maintance when we went there. So, I only took picture at its door.

Then we used Gojek (yeah, we used this app almost everytime we went somewhere) to Bank Mandiri Museum, located in the old banking distric of Jakarta Old Town next to Bank Indonesia Museum. 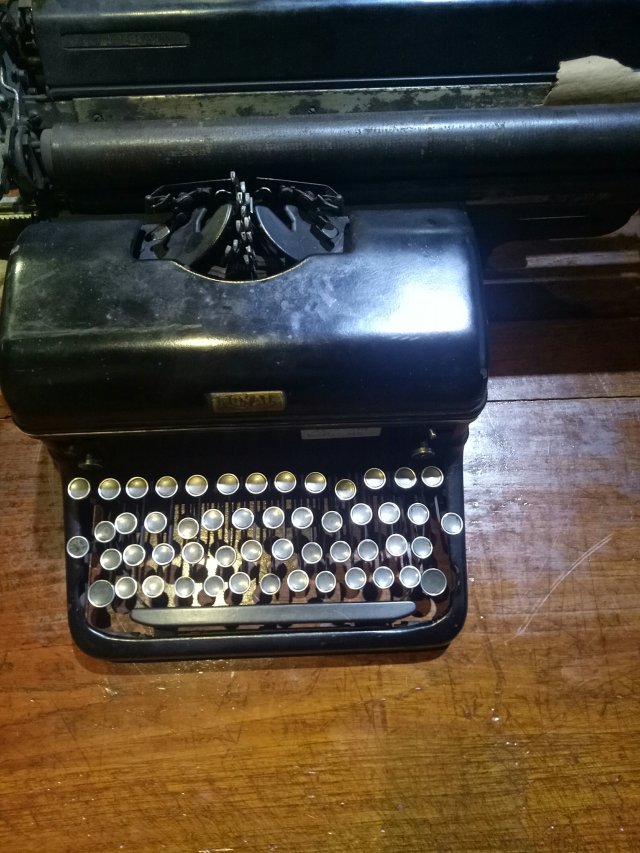 Unfortunately, we’re too late to visit Bank Indonesia Museum. The museum was established by Bank Mandiri on October 2, 1998. Its collection consists of various items related to banking activity and its development in “Tempo Doeloe” (in Indonesia meaning: “Good old days”). Its collection range from colonial bank owned supplies, securities, old currencies, old Dutch safe deposit box, and many others. In addition the building’s interior, old ornaments and furniture is kept as it was during the colonial era. (Source: Wikipedia)

For the next stop, we didn’t use Gojek. We just walked a few feet to the Fatahillah Square. The square is located at the center of Jakarta Old Town. It’s a tourist area home to the Jakarta History Museum, Wayang Museum, and Fine Art and Ceramics Museum. Before we walk around the square, we stop by a coffee shop named Kedai Kopi Kota Tua for a cup of coffee.

Afterward, we only had a few moments in the Jakarta History Museum and circumambulated the square. Subsequently, we decided to stop by another coffee shop named Acaraki right besides Kedai Kopi Kota Tua, this time for a cup of traditional drink called “Jamu”.
It tasted good, especially after a long walk. You’ll feel reenergized (
Thereafter, we went back to the shitty hostel and move to another hotel right away. We moved to Hotel 88 near Dharmahusada Hospital in West Jakarta. Finally, we can rest in piece (eh). We also have a nice dinner.

We definetely had a good rest and breakfast for extra energy to explore “Thousand Islands”. As usual, we used Gojek to get to the harbor before we crossed to the islands. We joined a tour to three islands. Our first stop was Kelor Island. It’s a small island with a former fort named Martello. 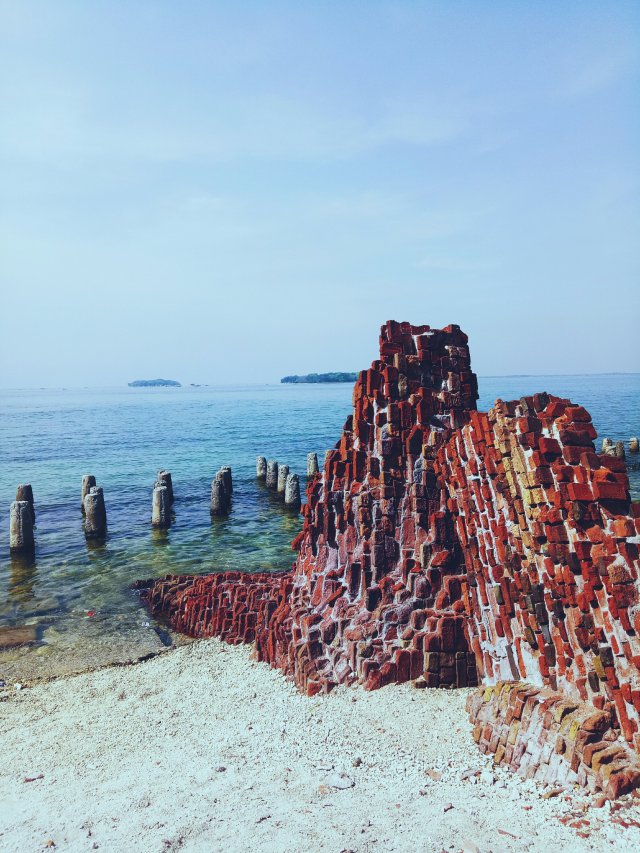 The second stop was Onrust Island. It’s bigger than Kelor with so many historical sites. Onrust island was used to be a naval based develpoed by Dutch people through the VOC. For over 200 years, the fort has been a symbol of Dutch rule across the north coast of Jakarta and Banten, and for a brief moment, the British. There’s even a Dutch cemetery in the center of the island. 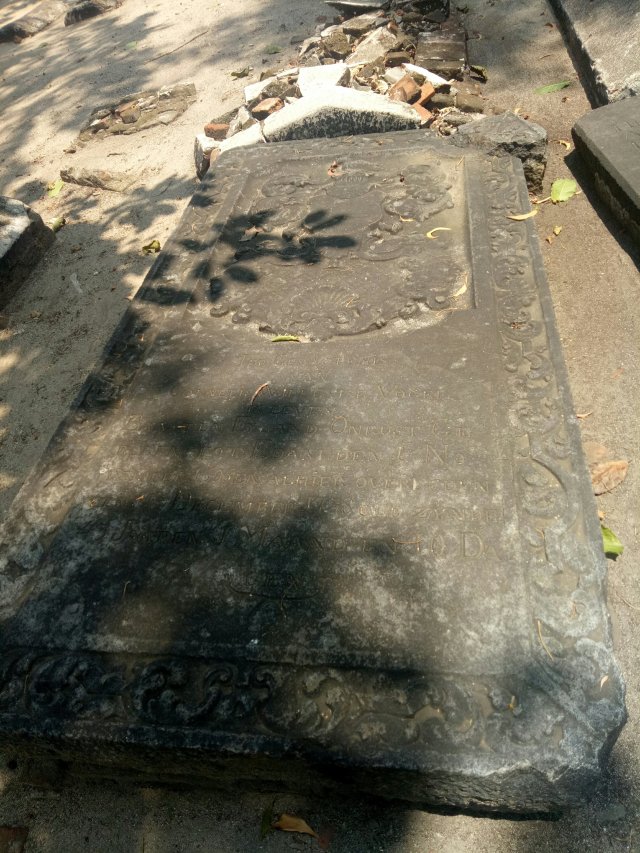 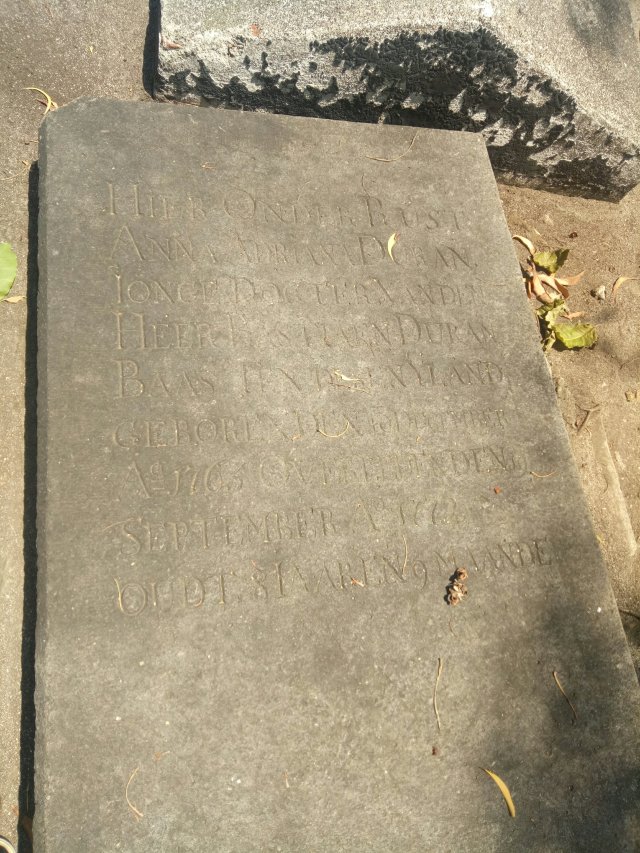 The most famous cemetery on the island is Mariam van de Velde (1693-1721). The guide said she died of a broken heart. There’s also a sacred cemetery of Indonesian men.
Onrust island was also used for the pilgrims quarantine.

The last stop was Cipir Island. There were old buildings used to be hospitals and public bath. At the time, me was too tired to looked around. So, we’re spending our time to took a nap.

Around 04.00 p.m, we went back to Jakarta, to attend the theater performance named “Bunga Penutup Abad”. It was a show inspired by Pramoedya’s books, The Earth of Mankind and Child of All Nations.

Before we went there, we ate dinner first, obviously. We went to another awesome Chinese restaurant, Wing Heng, North Jakarta. They served so many delicious food, especially food made with pork. 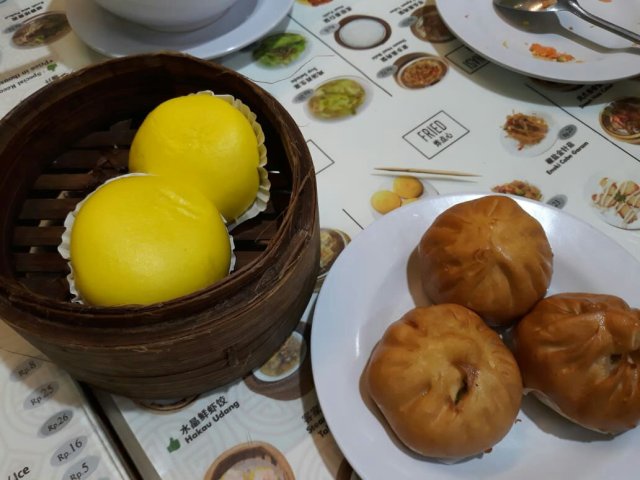 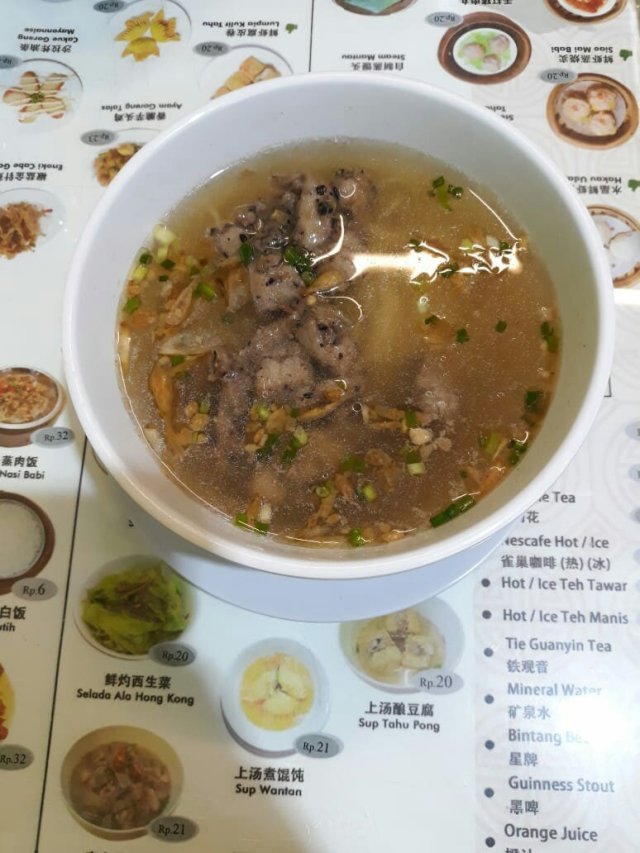 And we changed our hostel too. So, in 4 days and 3 nights trip, we stayed in 3 different hostels. I know it’s too lavish.

We were originally planned to go to JPCC church for this Sunday Service early in the morning. But alas, we overlepst due to weariness. So, the first thing we did in almost daylight was looking for food, duh. We had breakfast at Domino’s Pizza. 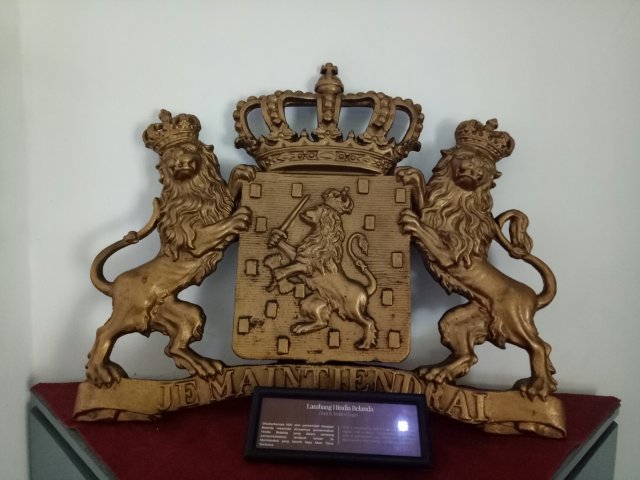 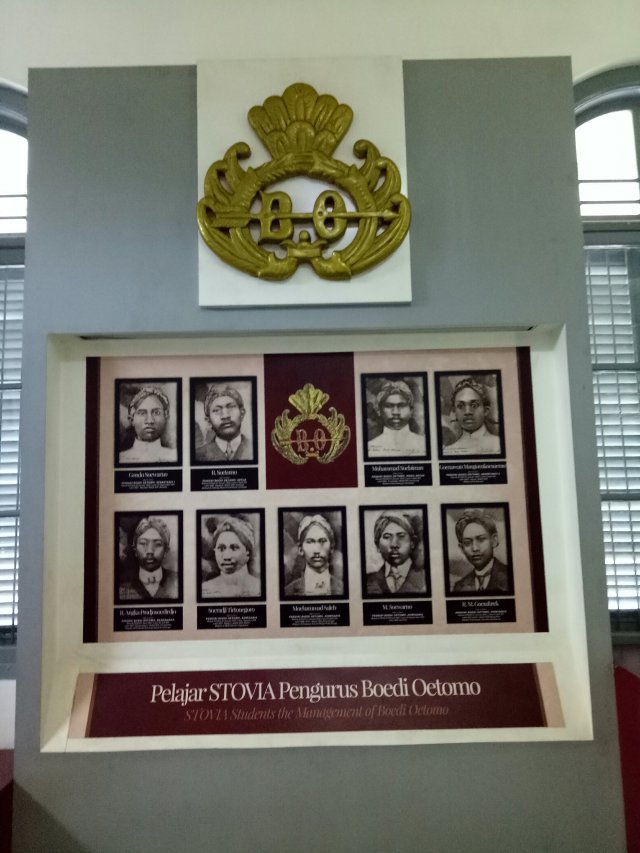 The building of the museum was constructed from 1899 to 1901. In March 1902, the building was officially opened under the name of

STOVIA, the colonial medicine school for the Javanese and other native people. Students were obliged to live in the dorm until the completion of the 10 years study.

Due to the building relation with the birth of Budi Utomo on May 20, 1908, whose day are officially Day of National Awakening since 1948, the building was restored by the government of Jakarta on April 1973. The building was officially made a heritage building by then President Suharto on May 20, 1974 under the name of Gedung Kebangkitan Nasional (“The Building of National Awakening”). The previous occupants were moved to Cengkareng area.

The building was initially made into four museums: Budi Utomo Museum, Museum of Women, Museum of Pers, and Museum of Health and Medicine. On February 7, 1984, the four museums were converged into the Museum of National Awakening.

Then, we went to Museum of Memorial Stone Park.

Museum Taman Prasasti (Indonesian for Museum of Memorial Stone Park or Inscription Museum[1]) is a museum located in Jakarta, Indonesia. The museum was formerly a cemetery, built by the Dutch colonial government in 1795 as a final resting place for noble Dutchmen. Several important person that was buried in the cemetery area are Olivia Mariamne Raffles – the first wife of British governor general Thomas Stamford Raffles – and Indonesian youth activist Soe Hok Gie.[2] 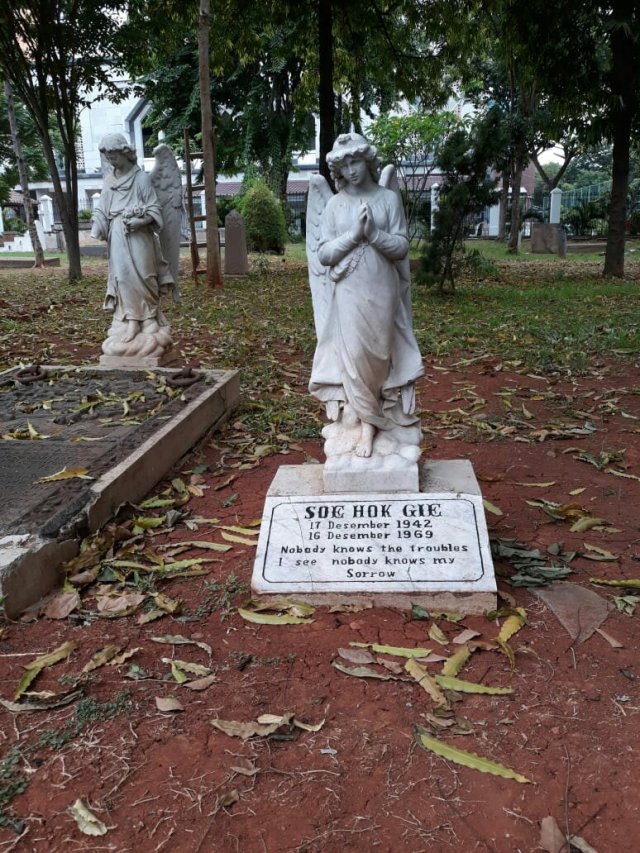 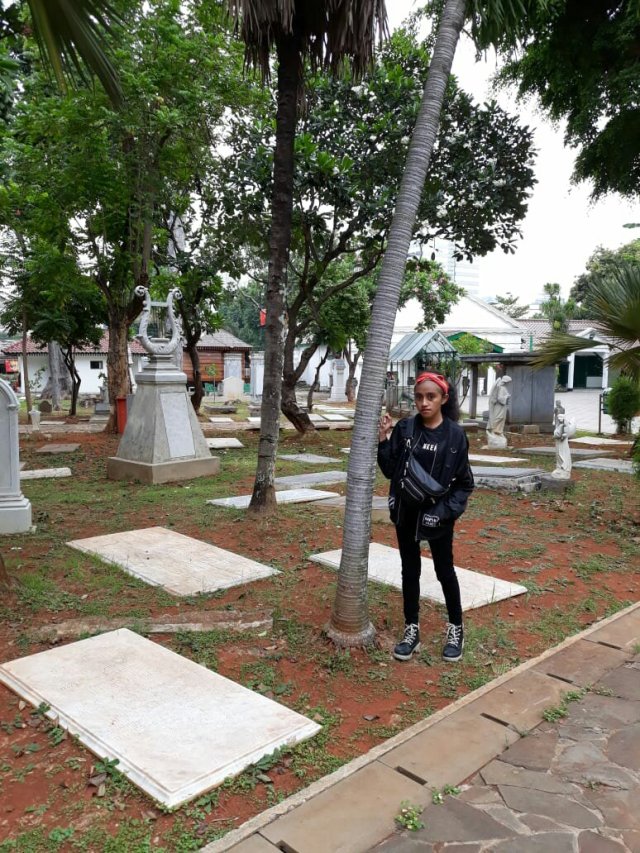 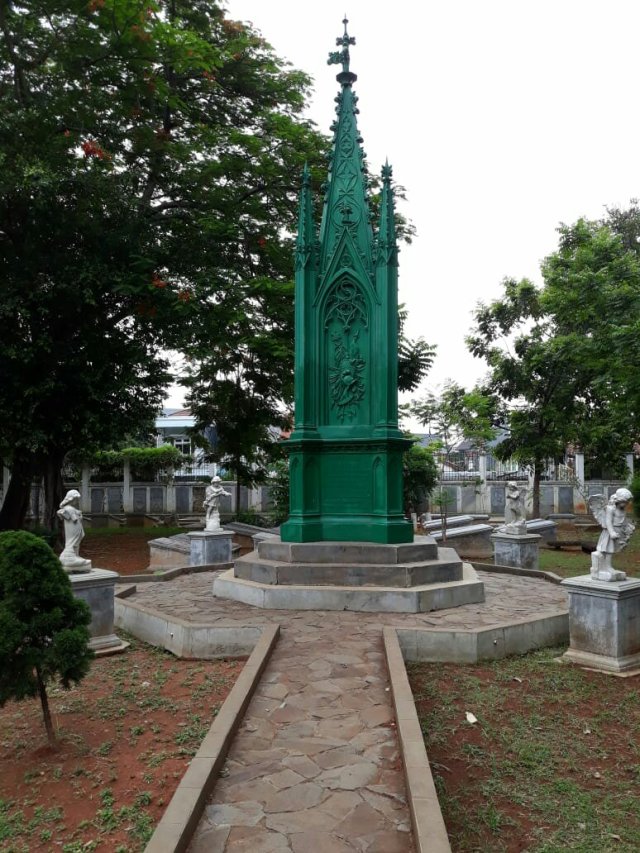 Thereafter, we went to The National Museum of Indonesia or populary known as Elephant Building.

The museum is regarded as one of the most complete and the best in Indonesia, as well as one of the finest museum in Southeast Asia.[2] The museum has preserved about 141,000 objects, ranged from prehistoric artifacts, to archeology, numismatics, ceramics, ethnography, history and geography collections.[3] It has comprehensive collections of stone statues of classical Hindu-Buddhist period of ancient Java and Sumatra, as well as quite extensive collections of Asian ceramics. 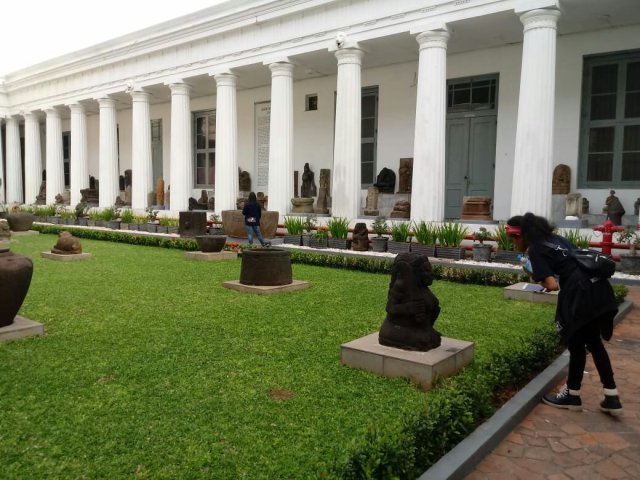 I didn’t tell my families or friends that I had short vacation to Jakarta back then. But, when I arrived there, I called one of my childhood friend who worked in South Jakarta to meet me at the Museum. Luckily, he’s free at the time.

Last time we met was around 4 years ago. 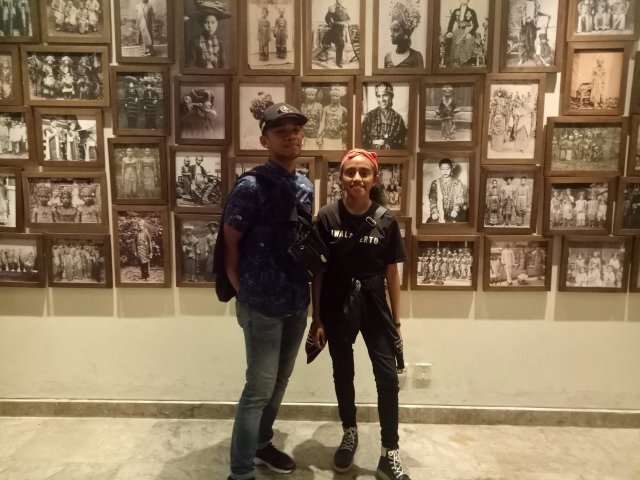 Oh, how I missed him!

Then the three of us went to eat the legendary ice cream at Ragusa Ice Cream. 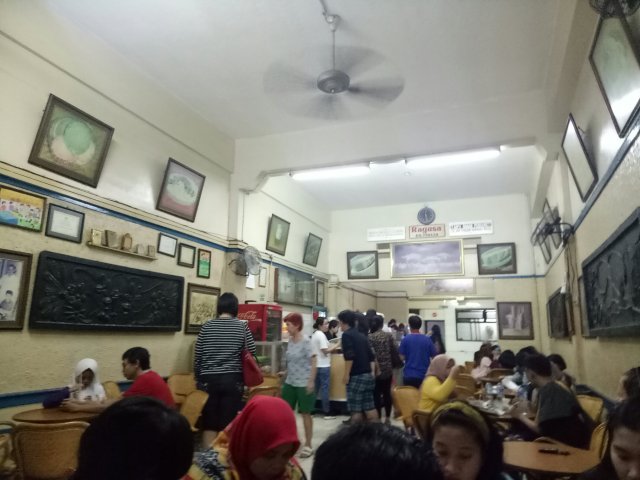 Afterwards, we went to the airport. That was the first time we use airport train and the sky train. It was so clean and nice! 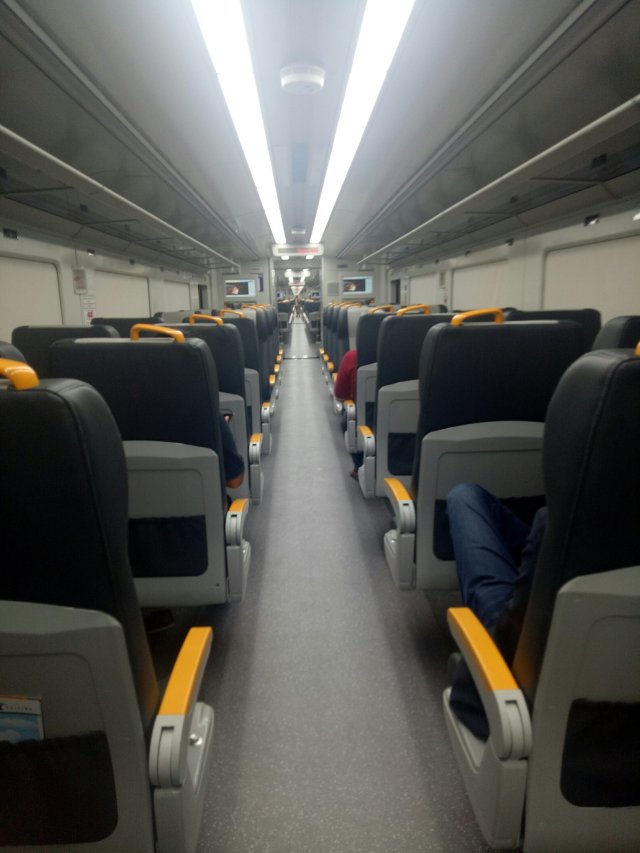 We flew back to Surabaya with AirAsia airline. It was my first time flying with that airlines.

See you on another adventure fellas!

2 thoughts on “Short Trip to Jakarta”

All that written here!